The Historical Background to 'Deadline with Death'

The time travel component to the story has a man travel from 1919 to the present day, and I make frequent reference to the Irish War of Independence. The War of Independence, also known as the Anglo-Irish war, lasted from 21 January 1919 until 11 July 1921. It was part of the revolutionary period that spanned the years 1912 to 1923. Here's a rough timeline of the main events and why they were important. If dates bore you senseless, skip to the box below for some fun research tidbits!

1870 onwards: The Irish Home Rule movement gathered momentum. The idea behind ‘Home Rule' was for Ireland to become a self-governing state within the United Kingdom of Great Britain and Ireland. The majority of its proponents did not envision Ireland leaving the United Kingdom. Indeed, total independence was seen as an extremist view by many Irish until after the 1916 Easter Rising. Home Rule had supporters among both Catholics and Protestants.

1912: The Third Home Rule Bill passed in the House of Commons and sparked violent opposition from Unionists (those who opposed Home Rule), particularly in Ulster. What began as small local militias developed into the more organised Ulster Volunteers.

1916: The Easter Rising. With the war showing no signs of ending, and still no Home Rule in place, a group of Irish Volunteers staged a rebellion over the Easter weekend. Initially, the uprising didn't receive a lot of support from the general population, but its ruthless suppression by the British armed forces and the subsequent execution of its leaders caused public outrage. The Irish became disillusioned and feared the Home Rule they'd been promised would never be implemented. Many former pro-Home Rulers began to regard full independence as the preferable solution.

1918: Word War I ended in November. In the December general election, the majority of seats were won by the nationalist Sinn Féin party.

1921: The War of Independence ended with the signing of the Anglo-Irish Treaty. The Treaty gave the counties that now form Northern Ireland the option to opt out of the newly formed Irish Free State, which they promptly did. While Ireland now had its own army, police force, and parliament, MPs were obliged to take a controversial oath of allegiance to the British monarch.

1922-1923: The Irish Civil War. The anti-treaty faction felt that the negotiators of the Anglo-Irish Treaty shouldn't have compromised on full independence and shouldn't have allowed a partition between north and south. A ten-month civil war broke out between the anti-treaty and the pro-treaty factions. The pro-treaty side won and the Irish Free State remained in place until 1937.

1937: A new Irish constitution introduced the Republic of Ireland, or Éire, which governs 26 counties of the 32 on the island of Ireland. 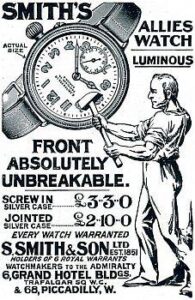 Here's an old ad for a WWI trench watch, similar to the one Matt wore in ‘Deadline with Death'. Trench watches (also known as campaign watches and allies watches) were wrist watches worn by soldiers during WWI. Prior to these watches, men preferred to wear fob watches and wrist watches, known as wristlets, were considered women's wear.

In addition to the practicality of wearing a watch on the wrist, these trench watches had another selling point: luminous dials. Instead of lighting a match to tell the time in the dark—and making oneself a sitting duck for the enemy—the dials were treated with radium paint. Unlike modern glow-in-the-dark watches, radium made the watches glow in both daylight and at night.

Although the luminous effect wore off within a couple of years, the radioactivity did not. Even today, antique trench watches should be treated with care. There's nothing like a radioactive glow, eh?

The Story Behind The Story
Settings
Giveaway
We use cookies on our website to give you the most relevant experience by remembering your preferences and repeat visits. We dot NOT sell your information. By clicking “Accept”, you consent to the use of ALL the cookies.
Cookie SettingsAccept All
Manage consent

This website uses cookies to improve your experience while you navigate through the website. Out of these, the cookies that are categorized as necessary are stored on your browser as they are essential for the working of basic functionalities of the website. We also use third-party cookies that help us analyze and understand how you use this website. These cookies will be stored in your browser only with your consent. You also have the option to opt-out of these cookies. But opting out of some of these cookies may affect your browsing experience.
Necessary Always Enabled
Necessary cookies are absolutely essential for the website to function properly. These cookies ensure basic functionalities and security features of the website, anonymously.
Analytics
Analytical cookies are used to understand how visitors interact with the website. These cookies help provide information on metrics the number of visitors, bounce rate, traffic source, etc.
Advertisement
Advertisement cookies are used to provide visitors with relevant ads and marketing campaigns. These cookies track visitors across websites and collect information to provide customized ads. Our site uses a Facebook Pixel so our advertising cookies would only be used if we decide to advertise on Facebook one day.
SAVE & ACCEPT